This morning I led a five-person team of Save the Children staff and volunteers to assess an area near , in northern Pariaman district. At first, near the main road, the damage didn’t seem that serious. But once we started heading toward the interior, up into the hills, we were alarmed by what we saw: skeletons of houses, splits in the road and metal roofs lying flat on the ground, surrounded by bricks and rubble. Most of the homes that were still standing had suffered irreparable damage, with huge cracks crisscrossing the walls.

Still many were occupied. People seem to have salvaged what belongings they could and moved them to areas that still provided some shelter. We passed two men sitting at a table in what must have been the dining room – now that the exterior wall had collapsed, it looked more like a patio. A number of homes were propped up by wooden posts, providing some support to the weakened structure. If another earthquake occurs, I fear they will do little good.

During this morning’s journey, our car was passed by a funeral procession. Six men carried a draped body; they were followed by at least 100 people. The crowd was winding its way slowly up the road toward us, so we stopped the car and waited until they passed. As we watched the group walk by, I was struck by how immaculately dressed they all were. Some probably borrowed clothing from friends or relatives. But many must have unearthed theirs from the debris, then washed and (somehow) pressed them. I find that rather noble.

By early afternoon our team finished a quick survey of the area. We selected a village that had, until recently, been cut off by landslides. Now one narrow road was clear. We worked with community leaders in Singai Pingai to arrange the distributions, prioritizing families in most need of help.

By day's end, Save the Children provided 810 families, or over 4,000 people, with hygiene kits and tarpaulins. But the day was not without its trials – managing crowds under any circumstance is a challenge, but especially so when people have spent days without assistance and are desperate for help. But we kept the lines moving and made sure goods made it to those most severely affected.

There are moments that make the stress and long hours worthwhile. Today one young mother came up to me, cradling a baby in a sling around her chest, and carrying the tarps and hygiene kit she’d just received on top of her head. She carefully extracted her right hand, offered it to me, and said, “terima kasih” – thank you in Indonesian, but literally translated as “receive love.” I think the feeling was mutual. 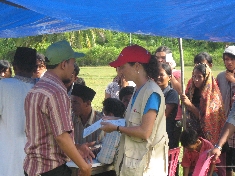 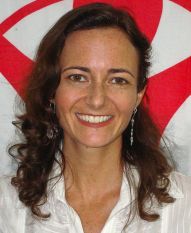 It’s hard to believe I’ve only been here four days – it feels like weeks! Our team is working very long hours, both here in the field and in our coordination centers. I don’t think twice about calling or texting my team members at midnight, because I know they’ll be up for at least two more hours. The urgency of this situation keeps us going. Hundreds of thousands of people – including children – are still trying to meet their basic needs. Today I spoke to a number of women who were gathering rainwater in order to bathe and wash their clothes. Save the Children is continuing to provide shelter materials, and I saw people rigging the tarps as soon as they left the distribution post. In nearly every village, community members take turns standing by the main road, flagging down passing cars and gathering donations. Most use these funds immediately to buy food to cook communal meals.

Save the Children has reached an estimated 4,600 people in the last two days, including over 2,700 children, with family hygiene kits, household supplies, and shelter materials. But there are so many more that need help. Tomorrow we’re traveling to more remote villages northwest of here, near . Our team leader toured the area this afternoon – in some communities, every house has collapsed. We’ll do a rapid assessment of the area tomorrow morning and start distributing supplies tomorrow afternoon.

Today, at one of the distribution sites, I spoke to a 54-year-old woman whose mother was killed in the earthquake. I didn’t expect this – there were fewer casualties in rural areas because most homes are only one story high, and people have time to escape. When she told me her story her eyes started welling up, and although I tried to suppress them, mine did as well. In the four years that I’ve been working in development and humanitarian agencies, this is the first time I’ve cried.

I’m now with a team of 12 Save the Children staff and three volunteers in the village of Pasa Dama, in the district of Padang Pariaman, about 50 kilometers north of Padang City. The earthquake devastated this area - it is the worst hit and, up until now, the least helped. Many areas have seen no relief.

This is where Save the Children will focus its humanitarian response and where we reached more than 450 families today with shelter and essential supplies.

In the last 24 hours, our team assessed 16 of the surrounding villages. We found that 70 to 95 percent of the homes have been severely damaged or destroyed. Almost everyone we spoke to was sleeping on the ground outside their homes, under makeshift tents. Children tell us they are afraid another quake will strike.

Today our team distributed tarpaulins and plastic sheeting to 458 families in two of these hard-hit villages. These items are critical — it’s been storming heavily for the last few hours, and the rains are expected to continue.

We’ve heard from both community leaders and health workers that colds and respiratory infections are on the rise – especially in children – since they’ve been sleeping outdoors, exposed to the elements.

Save the Children provided each of these families with 'hygiene kits,' which include soap, shampoo, toothpaste, toothbrushes, and other essentials. Each kit is enough for a family of five. Although some people were able to rescue their belongings from damaged homes, many lost everything and literally escaped with only the clothes on their backs. I’ve watched a number of families pick through the rubble, looking for anything they can still use.

I’m still shocked when I see another house that’s crumbled, or hear someone’s escape story. But I’m amazed by the local communities’ resilience. And I’m humbled by their generosity.

Our team has crowded into a young couple’s two-bedroom home to sleep – it survived the quake with only small cracks in the walls. Today some villagers insisted that I sit down with them and join in their community lunch. I protested at first, but after much urging took a little rice and vegetables. And yesterday, when I was speaking with three mothers and their children inside a tent, they offered me water to drink – even though all they possessed was a box of instant noodles, an oil lamp, and some bottled water! That time, I politely refused.