As I meet with children and families here in the sprawling refugee camps of northeastern Kenya, I hear amazing and harrowing stories.

Yesterday we visited the original refugee camp called IFO – a part of the camps that has been here since 1992. We drove up a dusty red sandy road to a thick fence made from gnarled tree branches. Inside the fence was a family of 10, living simply in two tiny mud and stick structures with few possessions. But this was no ordinary family.

It was led by Ibrahim, a thoroughly generous and engaging man with much hardship in his life. He came from Somalia in 1991 during horrible fighting in his country. 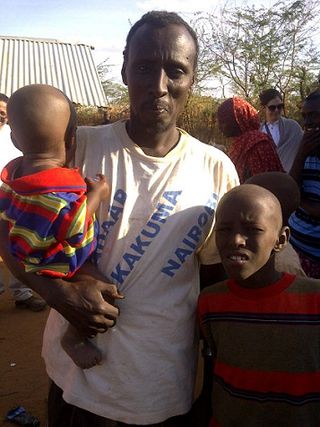 He settled in the original camp with his wife and young son after a tough journey of hundreds of miles. Ibrahim later lost his wife and four of his children to disease. He remarried though and had 6 more  children. He and his wife also care for many more children in his area of the camp.

As we talk, his children come to sit on his lap, next to him on an old can or peek out from behind his back. You can tell how much they love him. He tells me, “God gives back to those who do something for others, especially children.”

But what makes Ibrahim such a special man is that he and his wife, despite being very poor, have taken in yet another two children. A 13-year-old mother and her newborn baby girl who arrived two months ago from Somalia after their own grueling journey. Ibrahim and his wife agreed to be a foster family for the teen mom and baby as part of Save the Children’s child protection program.

Despite having so little, they share what they do have with others.

Learn more about our response to the food crisis in the Horn of Africa.

Help Us Respond to the Food Crisis in the Horn of Africa. Please Donate Now.