It’s hard to reconcile the beautiful highlands of Guatemala, where I was in mid-January, with this stark fact: the child malnutrition rate here is the highest in the Western hemisphere. Roughly 5 out of every 10 Guatemalan children suffer from chronic malnutrition. All 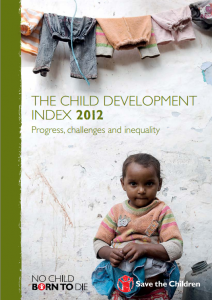 This week, we released our Child Development Index and the bottom line is: kids deserve a lot better. The Index ranks the best and worst places in the world to be a child based on education, health, and nutrition statistics.

While there is some good news in terms of education and child survival rates—33% more kids are in school now than in the 1990s and almost 5 million more kids surviving to age 5 per year—there is one part of the report that is really shocking. In the 21st century, we still have children in the world without enough to eat every day—and it’s gotten worse over the last decade, not better. The number of acutely malnourished children across the globe has actually risen since 2000. The situation is particularly