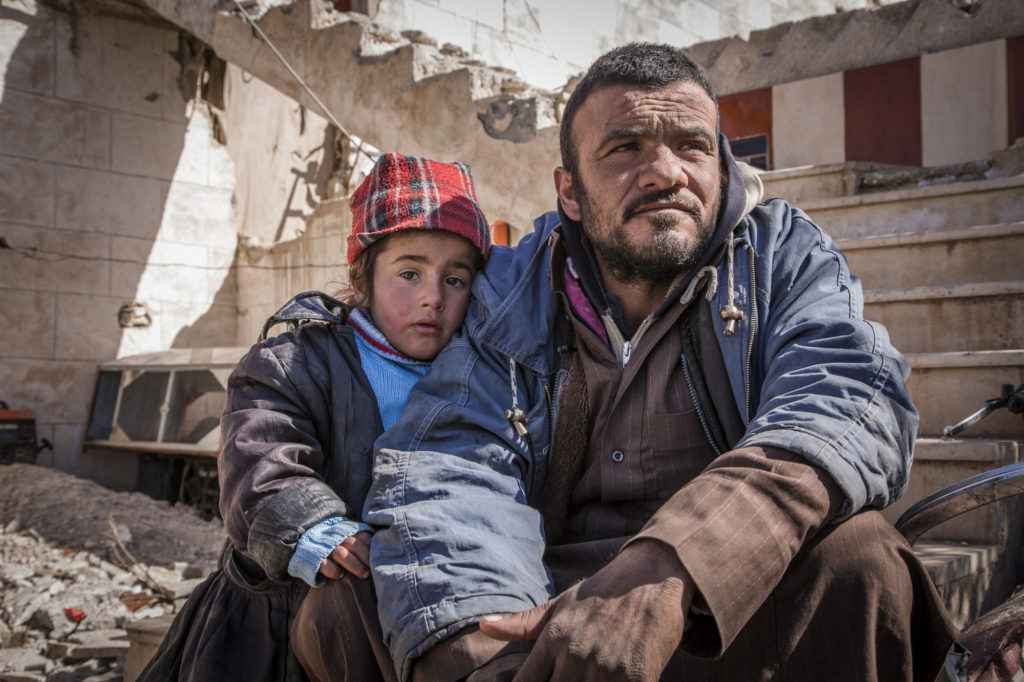 Written by Carolyn Miles, President & CEO, Save the Children | Originally published on Devex.com

After six years of war, people were weary and on edge. Neighborhoods were hardly recognizable. Fresh food was a luxury that no one had. Schools were closed or moved elsewhere. Children’s bodies displayed pealing burns that only a bomb could cause. Nearly everyone knew someone who had been killed.

It’s hard to know whether I’m describing the end of World War II, or Syria today. Both wars battered entire generations of people, but one notable date separates these two horrific events. Today inexcusably begins the seventh year of the war in Syria, and on Friday, the war in Syria will become longer than World War II.

Sadly, the psychological toll of war is one of the greatest similarities between the two and will have the longest lasting impact in Syria, just as it did after WWII. We need to invest more in psychosocial support and make another concerted effort to convince all sides to end the violence.

Daily exposure to the kind of traumatic events that Syrian children face will likely lead to a rise in long-term mental health disorders such as post-traumatic stress disorder, depression and social anxiety. Living in a constant state of fear can create a condition known as “toxic stress,” which, if left untreated, can have a life-long impact on children’s mental and physical health. Harvard University’s Center on the Developing Child reports that toxic stress can disrupt the development of the brain and other organs and increase the risk of stress-related diseases, heart disease, diabetes, substance abuse, depression and deep-rooted emotional scars.

Among the 3.5 million Jewish people who survived World War II in Europe, and the 183,000 people who survived the atomic bomb blasts in Japan, many are known to have suffered from physical and psychological problems decades after the fighting ended. Research done by the Never Ever Again organization in Scotland even shows that the grandchildren of Holocaust and bomb survivors have experienced secondary and transgenerational trauma.

A new study conducted by Save the Children inside Syria shows that people are feeling the psychological effects of war: 84% of adults and almost all children said that ongoing bombing and shelling is the number one cause of psychological stress in children’s daily lives. And 48% of adults have seen children who have lost their ability to speak or suffer from speech impediments as a result of living in such a dangerous and uncertain environment.

A teacher we work with in the besieged town of Madaya told us that children are psychologically crushed and tired. “When we do activities like singing with them, they don’t react at all, they don’t laugh like they would normally. They draw images of children being butchered in the war, or tanks, or the siege and lack of food.”

Another teacher told us that children have been so traumatized they express wishing they were dead because at least heaven would be warm and would offer food and a place to be safe and play.

While the world has clearly not learned the lessons of past wars in many respects, as the war in Syria continues, one lesson we can learn from World War II is the importance of addressing psychosocial issues among children early and often.

U.N. Security Council members, and other countries that have been unable to bring warring sides to the negotiation table, need to increase investments in mental health care inside the country and insist that all sides agree to a minimum set of measures to ensure the protection and safety of children in Syria.

Programs that support children’s resilience and well-being must also be given special attention and additional funding. Children are incredibly resilient but only if they are given the proper outlets and tools to recover and thrive. Programs to support parents could also help children feel more supported.

Finally, relatively small investments to train teachers and school personnel in conflict sensitive approaches to education, such as art therapy, would yield positive results now and into the future.

In the U.S., Congress should take such critical investments into consideration as it determines the 2017 international affairs budget. Cuts now will hurt Syria’s children in the short and long term.

Children who survived World War II in Europe and Asia went on to become Nobel laureates, actors, scientists, fashion designers, teachers and more. Syrian children hold the same potential, but as the war drags into its seventh year, individuals and leaders must summon the will and the means to support children during this horrible time.

Written by Carolyn Miles, President & CEO, Save the Children

If your children are like mine, June is filled with excitement for the end of the school year and the prospect of a summer of fun. My daughter just graduated from 8th grade and I remember well the excitement of my older sons when summer rolled around.  But for the 3.2 million refugee children around the world who are out of school, they can only dream of being in a classroom. Their school year is not ending, because sadly it never began.

Refugee children are five times more likely to be out of school than other children. Over the summer, Save the Children will be pushing hard to ensure that every last refugee child has access to education and is learning.

Education sets children up for success, provides hope and opportunities for the future, as well as a sense of stability and normalcy for those who are overcoming traumatic events. It also prepares children with the skills needed to rebuild and help develop their home countries if and when they return.

It’s crucial that no refugee child is out of school for more than one month after having had to flee their home in search of safety. While that may seem like a tall order to some, there is no technical or financial reason that the international community cannot come together to make this principle happen.

Equally sad, tens of thousands of children around the world, if not more, will likely spend their summer fleeing conflict, be it on foot through the desert, in a rickety boat for hundreds of miles across the Mediterranean or Andaman Sea, or stuffed in the back of a crowded truck by human traffickers. This year alone, nearly 3,000 people have died trying to cross the Mediterranean, and we are hearing reports that 34 people, including 20 children, were found dead in the Sahara desert just last week. In 2015, nearly 400 people died in the Bay of Bengal and Andaman Sea, not by drowning but because of starvation, disease and abuse by smugglers.

We need to work harder to ensure that children on the move are better protected. Girls and boys who are forced to leave their homes, sometimes separated from their families, are at significant risk of abuse and exploitation. Such long and dangerous journeys also negatively impact children’s physical and mental health. Focusing on education and counseling can make all the difference.

Too often refugees are thought of in the abstract. Today, on World Refugee Day, it is critical to remember that refugees are people like you and me. They have had to leave their homes, and everything they know, in search of safety and security. These people are struggling through unthinkable circumstances, and deserve the same rights, protections, and respect as we all expect.

I will always remember a visit to the Zaatari refugee camp in Jordan a few years ago near the start of the Syrian conflict.  When I asked a 15-year-old boy there, one who had been a star student at home in Syria, what his future held, he told me, “I have no future”.  It’s not what we should hear from a 15-year-old boy.

We need negotiated political solutions to the multiple conflicts forcing families to flee their homes, from Syria to South Sudan. But for the child who is 10 years old yet has never been to school, the dream is simply safety for her family and to attend school. World leaders, aid organizations and private corporations who care about our future can and must do more to make that dream a reality.