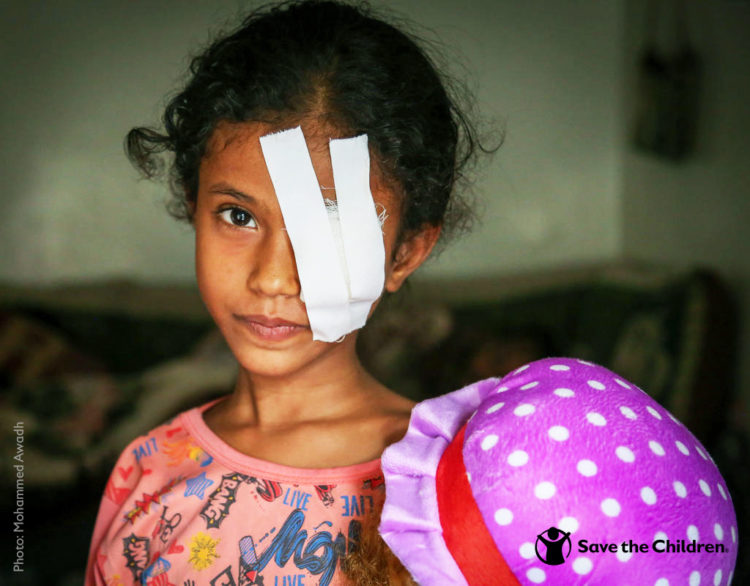 The situation for Yemen’s children is nothing short of dire. Some 11.3 million children in Yemen are facing a triple threat of bombs, hunger and disease.

The journey for those trying to flee, however, is often no safer: families have to brave minefields and airstrikes and are forced to cross areas of active fighting, all in a bid to escape the embattled governorate. There have been 18,000 airstrikes since March 2018, killing 2,398 children and injuring countless more.1  Civilian casualties in the most impacted districts more than doubled in the start of July as the fighting moved to more populated areas, according to the UN’s Refugee Agency.

Children’s injuries incurred as a result of airstrikes are often complex and require a specialist treatment. Families on the run need to sometimes make the impossible decision of whether to continue to flee towards safety or stop and seek out medical care, if they can afford it.

Eight-year-old Razan* was severely wounded in one eye after a bomb exploded nearby as she and her father tried to leave. She was in agony for days and her family feared she was permanently blinded.

“When Razan was injured, the airstrike was just yards away from us. The airstrike hit an armored vehicle nearby and flying shrapnel hit Razan in the eye. I tried to get us to a safe place to have a look at her eye, and then I bandaged her up with my shawl. Then we had to carry on moving,” said Samir,* Razan’s father.

“Razan had to go five days without treatment because I didn’t have enough money. After five days I asked Razan whether she could still see through her injured eye. She lied and said yes. We went upstairs, and I asked her to count the birds outside, while I covered her good eye. She said there were two, but there were four.”

Razan eventually reached a specialist hospital, where Save the Children referred her for emergency surgery that should restore her eyesight.

Thanks to support from Save the Children’s donors, Razan received the special medical care she needed. But there are many more children like her who are not getting the care they need.

To learn more about the work Save the Children has done to help children in Yemen, visit our website.

YOUR SUPPORT CAN MAKE THE DIFFERENCE FOR CHILDREN IN NEED. MAKE A DONATION TODAY!