Communications Manager, Save the Children Greece

Here on the Greek island of Lesvos we’ve been hit by winter. A three-day storm brought chaos and desperation during a week that saw the highest numbers of arrivals onto the island for the whole year. 48,000 people had arrived by dinghy across the Greek islands over just five days, which is more than all of last year combined. The island of Lesvos saw over 27,000 alone, and all at the worst possible time.

In normal circumstances, a storm shouldn’t be a problem on a Greek island. But on Lesvos, and across all the travel routes from here to north Europe, the lack of shelter and basic services means people fleeing war and extreme poverty are facing unthinkable conditions. On Lesvos, there have been two transits camps. Moria was for non-Syrians, predominantly those from Afghanistan. Syrians stay in Kara Tepe, and have a quicker registration process. The services in Kara Tepe have always been better; the majority of people coming here are Syrians so the majority of the response has been there, but it’s not acceptable and the consequences are now more apparent than ever. 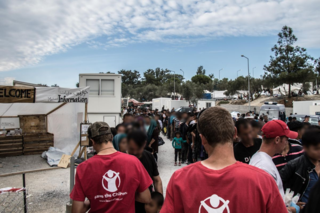 Save the Children aid workers distribute hot meals at Moria camp. We are maknig sure no child or family goes hungry.

Save the Children works in both camps, as do other agencies, and we provide a cooked meal once every day for between 2,000–8,000 people, depending on how many people are there. We also run a safe space for children, and for mothers who need to feed their children, as well as identifying the most vulnerable families who need extra support. We work to improve systems to protect children, especially the most vulnerable like those who are separated from their family or who arrive here alone. But there have never been enough services in Moria and every day our team works with children and families who need extra help whenever we come across them, finding doctors, getting information, referring people to other support. Recently, the camps were thrown into disarray again as registration processes were changed and Syrians were brought to register in Moria as well. People were moved back and forth between the camps, causing delays and a backlog of people stuck on the island. A direct consequence of this was the chaos that we saw during the storm, and so much unnecessary suffering.

In Moria camp, I was stopped in my tracks by a child shivering uncontrollably. She was unable to walk or make eye contact, her hands and lips were literally blue. Her mother was nearby, also unable to walk. One of our team members picked up the little girl and the rest of us carried the mother to Medecins Sans Frontieres, a medical aid agency. A crowd was gathered outside; there are just too many people in need of doctors. Minutes later, we found three young men unconscious with hypothermia, whose friends had dragged them through a hole in a fence into the camp. Working with UN staff and volunteers, we did everything we could for them while we waited for the one of two ambulances on the island to take them 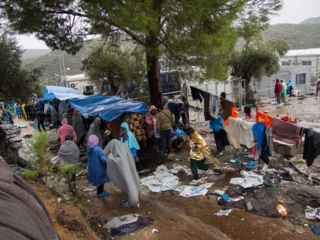 to hospital. One of the men regained consciousness, and tears of pain and complete anguish began to run down his face as we desperately rubbed his hands and feet to try and get any warmth into them. Like thousands of others, including children, they had been forced to sleep for three days in the field next to the transit camps because the queue for non-Syrians to be registered had been moved outside to make way for the new system. Right now, there are no toilets for those waiting in the queues outside the camp, so feces mix into the flowing streams of water. Save the Children is working with other agencies provide basic sanitation facilities but with systems and the context always changing, we need to constantly change plans to make sure we can support children wherever the needs are greatest.

Only families who had been registered were allowed to sleep inside the transit camp but that is not much better. Moria is on a hill, and most of it isn’t graveled so the rainwater turned nearly the entire area into a mud bath. The skin on every last child’s hands and feet was completely shriveled from being in water and mud for three days. People had resorted to lighting fires in the tents and porta cabins to try and get warm, and smoke billowed throughout the camp. People who’ve fled Syria, Iraq and Afghanistan, who’ve faced unbelievable violence and poverty, were breaking down in tears at what was happening. A woman from Afghanistan who was waiting in our food distribution line with her children reached out and clung to me, sobbing into my shoulder, clearly having reached her limit and needing some kind of comfort, even from a complete stranger. All day long, people were pleading for help from anybody. Mothers wrapped their babies in rubbish bags trying to keep them dry, and fathers held plastic bags over the heads of their children. We gave out all our stocks of blankets and dry clothes but there just wasn’t enough. The lack of dignity these people were facing was shocking to see, even for aid workers like us at Save the Children who’ve worked in camps, conflict areas and natural disasters for years.

To date, we’ve had children dying when their boat capsizes as they try to reach Greece by sea. But now we know for sure that we are potentially faced with deaths inside the camps.

At the border between Greece and the former Yugoslavian republic of Macedonia (FYROM), where people move onwards after the islands, the first snows are expected next month. Though there are more systems in place there, when they cross over the border, they have nothing but the clothes they wear to protect them from the elements. Save the Children is running a safe space for children there, as well as supporting the most vulnerable children who need extra help, and will be distributing warm clothes, boots and blankets for children. But we already are seeing people wearing plastic bags inside their shoes or sandals, or using litter bags as makeshift raincoats. With border crossing taking place through the night, it’s harrowing for children and adults to be making the 1.5km walk between the Greece and FYROM border, in the dark, marshalled by armed border guards and corralled through as part of a stressed and tired group of people.

Along the journey refugees and migrants take, Save the Children, UN agencies and other international agencies, along with tireless volunteer groups, are doing everything they can. But it is just not enough. The past week has been just a glimpse of what lies ahead in the coming months and it’s terrifying to think that a child could die here after they have arrived in Greece. More must be done for the thousands of child refugees and migrants who arrive here and move onwards in the hopes of safety and a better life.

To learn more about our response to the refugee crisis, click here.