Psychosocial support initiatives for children was needed in so many communities that it became rather difficult to make decisions on where to establish programmes. To ensure that all the communities in need were reached, we coordinated with other actors such as aid agencies, local and national government departments.

In Tacloban City, many displaced children were staying in evacuation centres—mostly schools and other larger centres that had all been damaged to some extent, yet offered a roof, or partial one, under which to sleep. Work in the evacuation centres was being coordinated through the City Social Welfare Department and there were plans to utilize day care centre workers with the tasks of operating child friendly spaces. But many of the day care centre workers were, of course, themselves affected and were also putting the pieces of their lives back together.  We began with some simple measures to set up child friendly spaces in evacuation centres with the support of teachers and other community volunteers.

Panaloran School in Tacloban was one such evacuation centre. On the morning of Typhoon Yolanda, it housed up to 70 children and numerous families.  The school yard looked like a battle zone, yet the main building itself had withstood a large brunt of the storm.  The same families that had sheltered there in preparation for the storm were still residing in the few classrooms.  I met many heroes during my time in Leyte—their selfless actions saved the lives of countless children—but I particularly remember the poignant stories from a man named Oscar in Panaloran School.

Oscar, a community member in Tacloban stands in front of a school where he, his wife and 30 community members took shelter during Typhoon Haiyan. Photo Credit: David Bloomer/Save the Children

Oscar and the others at the school were in a ground level classroom on the morning of the storm. They anticipated the high winds but few had any inkling of the storm surge that would accompany it. As it became apparent that the water was going to rise above their heads, they moved to the second floor of the building despite greater risk of debris flying through the air. But the strength of the water currents made it impossible for them to open the classroom door.  Oscar broke open one of the windows and each person scrambled out through it; children were carried through the window to waiting adults on the other side. Oscar was the last one out.

The children at the school were the saddest I had witnessed in my first few days. We quickly mobilized the adults at the school; provided them with protective gear and provided cash for work for the clean-up of the school.  This was the most amazing community—by the time I had returned in the afternoon, the school had been cleared almost entirely of dangerous debris; a small classroom that was ankle deep in mud and other debris had been cleared and was being prepared for a child friendly space and temporary learning space.  Most gratifyingly, the children wore smiles on their faces and looked happy; this only in anticipation that a small space for them was being established and they would have a place to be with their friends and could engage in some fun activities. In other words, a chance to take their mind off of the horror that surrounded them.

It was Oscar’s wife, a teacher herself, who led most of the activities for children in those early days. This was a woman who was badly affected herself, but gave her time to the children instead of salvaging her belongings and rebuilding her home. The children always came first. 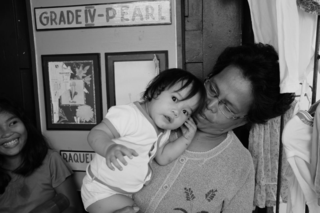 Oscar’s wife, a teacher at the school her and her husband took shelter in during the storm, stands with one of the children her husband saved. She is now living at the school with her husband, Oscar, after their home was badly damaged by the Typhoon. Photo Credit: David Bloomer/Save the Children

As activities went on, I saw even more smiles on the faces of children the next day as they played with their friends and held cuddly soft toys. The scene at Panaloran School was one repeated over and over again in villages, communities and towns.