A privilege of working for Save the Children
is that we get to work closely with local partners to reach the most vulnerable
children, and witness the changes happening in their lives and our projects’
significant impact on communities as a whole. 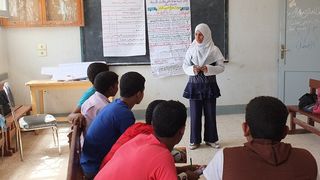 Last week, I visited Arab El Kadadeh
Preparatory School in Arab El Kadadeh village, one of our impact areas in Abnoub
District in Upper Egypt.I was there to follow up on the livelihood peer-to-peer
sessions implemented through our “New Beginning (NB) -Youth Economic
Empowerment Program”.The program aims to strengthen the economic skills of
youth and enable them to then pass on their skills to their peers.

When I walked into the classroom, I
could sense the motivation and hope. The facilitator amazed me with her
confident performance as she lead the class, explaining the educational
materials and facilitating the games and activities.

Seeing Esraa, a Youth Trainer,I remembered the
first time we met a year ago at a similar session in the same school. She was a brilliant
14-year old with great enthusiasm. After graduating, she went on to establish a small
grocery business in her village. Through her store, she makes a good profit and
is able tohelp herself and contribute to her family’s income.She is already
looking to expand her business.

When I asked about her time with New Beginning
and her future dreams, she answered, “I am so happy that I had such a great
opportunity to learn and practice new stuff at my early age. When I see my
colleagues who did not attend, I feel lucky and I hope I can do something to
help them.” Her dream of sharing her experience with her colleagues was
fulfilled when she joined the peer-to-peer initiative and started facilitating
classes.

Every time I meet with youth, I
encourage them to take advantage of the opportunities offered to them by Save
the Children at this early age, and to share their experiences with their peers. Meeting
children like Esraa, and witnessing how positively their lives have changed is the
engine that keeps me motivated.

Today we visited the King Abdullah Park refugee camp in northern Jordan, outside of Ramtha. The weather is still cold, rainy and windy today, and it is hard to think that these conditions will only continue to worsen over the coming months. King Abdullah Park is a much smaller site than the Za’atari camp that we visited yesterday, and it is a more enclosed space that can only accommodate around 1,200 people. The site was previously meant to be a park for the nearby neighborhoods, but upon completion, the Syrian crisis elevated and the Jordanian government turned it into a space for a refugee camp.

Given the more manageable size, the conditions are slightly different from the larger Za’atari camp, which is in constant influx. Here, each family has a container with solid walls and floors, raised off the ground, which is crucial during the cold and rainy winter months.

There are around 450 children at the camp, and many of them are able to attend local Jordanian state-run schools in the nearby towns. Everyday, Save the Children helps to transport the children back and forth between the schools and the camp, separately busing girls and boys to their different schools. To maintain a sense of normalcy and reduce the tension that the upheaval has caused, the Syrian children go to school in separate sessions from the Jordanian children. The schools and teachers have graciously accommodated the new children, and have taken on more hours and longer shifts in order to handle the increased need for schooling.

While at the camp, we had the opportunity to visit another child friendly space run by Save the Children. Similar to yesterday, we were met by dozens of happy, bright-eyed children, who were eager to play, sing and dance. The space, albeit cold due to the weather, was brightly colored and filled with toys. Given the rain, the older children who are often able to play soccer and volleyball on the outside fields needed to be inside the space with the younger children. The teachers and Save the Children staff have the patience and attentiveness of saints, and were able to manage the large number of children with care, warmth and joy.

We also learned how selfless the staff is, as many of them have taken time off from their jobs elsewhere in Jordan to help aid in the refugee efforts. We met two men, one of whom is a physical education teacher nearby, and another who runs his own hair salon! They both now spend their days running around with a highly energetic group of children who are confined to the boundaries of their campsite and are in need of attention and activity. It is through acts of kindness such as these that you can truly see the generosity of the Jordanian people, who have accommodated so many people that have nowhere else to turn.

We stayed at the space for over an hour, having been immediately accepted by the engaging and friendly children and staff. We were able to partake in a number of different activities that the children were doing, including drawing beautiful pictures of Syrian flags, flowers, smiling faces, and hearts.  They were also performing puppet shows that they had created themselves, playing ping-pong, badminton and legos. There were also dozens of toys for the children to play with, and it was clear that the space provides a respite from the more tedious camp life that awaits them outside. 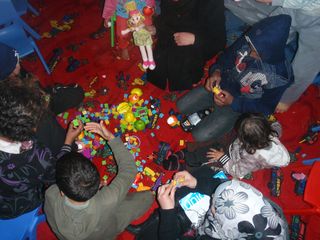 At the end of the morning session at the child friendly space, the children headed out to the school buses that were waiting to take them to the local schools. We followed them to Ramtha, where we visited a first-grade girls’ classroom. The teacher was conducting a math lesson, and the eight girls (smaller class size than average due to the weather) enthusiastically took turns coming up to the chalkboard to practice arithmetic, happily cheering when they arrived at the right answers. Despite the hardships they have been through, their excitement and energy is contagious. They left us with a renewed belief that children everywhere deserve the chance to have a childhood, regardless of their circumstances. 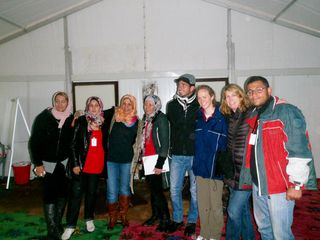 Their lives are by no means easy, and their living conditions make their days even harder. All sense of normalcy they once had is gone, and even after months of living in the camps away from their homes and the lives they once knew, they face continuous adjustment. In a world where humans can do so much harm and cause so much destruction, the work that the Jordanian government and its people, Save the Children, UNICEF, UNHCR and other organizations are doing on the ground shows the best of humanity; and at the end of the day, that is all that we have.